The question many advisers in motormagazin nervously twitching eyes:

Visors, glasses and windshields affect the success of the journey no less than other components of equipment. For example, without a windshield at high speeds to go will not be sweet, and do not know what is most capable of your ward moth-blow away, the natural speed limiter is obtained.

When you do not have a tinted visor, on a bright Sunny day you have to move almost by touch. But at night wearing a helmet with tinted visor I can not see anything except the lights of the headlights of cars lights. I met cunning people who tinted the windshield in the transition (the bottom is the darkest coating, the higher-the lighter) and they ride in conventional visors, but if necessary, bend closer to the tank.

This method is more relevant for spotbikes, because in other classes, where the landing is more free and allows a flat back, it is quite uncomfortable to bend down to the tank.

Relatively independent tinting-the success of this case does not always end and often then have to buy a replacement.

During the experiments, the garage has seen everything from attempts to apply the varnish and added in the paint, before gluing all sorts of gadgets, not designed for this.

If your heart is sweeter home course of a young chemist than buying a specialized visor / glasses/windshield, then I will share my personal experience. I will make a reservation that the windscreen from Ducati Panigale 659 got under distribution. The owner of the motorcycle honestly admitted that for the purchase of tinted glass, he was strangled by a green amphibian, a big one and thick. Supposedly easier to get a Yes zakljuciti native glass.

It is logical that before the execution of the element must be removed and cleaned. If we are talking about visors, then this is a good reason to check the condition of the mounts or even replace them with new ones, and there is a new visor to put not long.
Tinted over scratches is not necessary, ideally polirnut surface. In any case, self-polishing and toning long lives rarely and then only in painstaking craftsmen. We will talk about polishing methods later in a separate article.
Our glass, washed from the accumulated dirt, was treated with a degreaser.

Before applying the degreaser, I advise you to be safe and drip a little on the edge of the surface. It happens that the glass left traces of previous coatings, which you may not know.

It is not recommend for degreasing use petrol, white spirit or kerosene, they are too aggressive for surfaces of glass, cameras or glasses. Recently, the use of antisilicon instead of degreaser is gaining popularity.

The carefully polished, pristine glass was ready to take on the tinting. Applied carefully: layer by layer so that the next overlapped the previous half. Painters call this method "wet", as the torch of the spray does not leave a trail of dust. It's very, very important. Because if in completing the you start pripylyat tinting, then arrive at simply darkened lens, through which at all nothing not in sight. At all.

That's how we knew it was a bad idea to level the layers with the dust. But after re-applying the " wet " method, everything returned to normal.

They applied the tint on the inside. This is logical, otherwise the weather and the headwind would erase our collective farm labor from a good motorcycle.

In fact, it turned out well. Even passable. Later, the owner came to the conclusion that the tinting is too harsh and you need to make it easier. The best is the enemy of the good and the endless circle of work glass is not made. Subsequently, it was covered with microcracks and when processing from the chemicals that got into them, it deteriorated irrevocably. 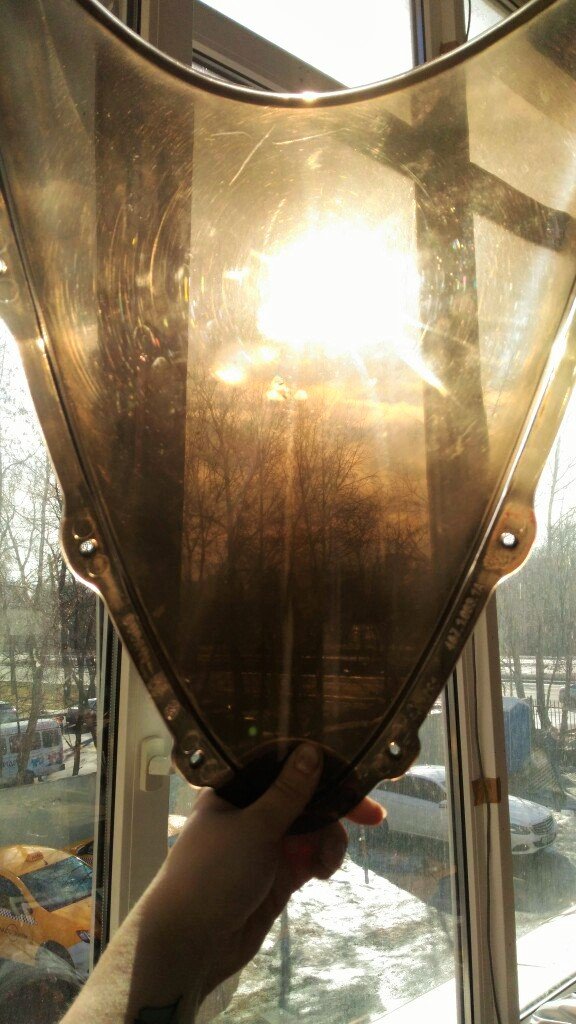 Conclusion: self-toning is good as a temporary measure, nothing more.

Yes, already ready tinted and prepared for you glasses/visors and glasses are more expensive than the home work of an enthusiast, but you get a properly prepared product that will last much longer.

тонировкаветровоестеклотюнинг
Rate the article
Are you ready for off-season and winter travel?
The secrets of the lubrication circuit
Смотрите также
155
on reading
Icon men's motorcycle jackets-spring new items 2020
323
on reading
Spring new items Icon 2020-motorcycle helmets
250
on reading
New tracksuit Icon Hypersport Battlescar-soldier of fortune has reached a new level
485
on reading
Pinlock - why do motorcyclists need it?
Comments
No comment yet
8 (800) 555-24-78
Callback
professional advice
Operating time
without days mon-sun 11: 00-21:00